So excited that my next release in the Billionaire Breakfast Club is coming out one month from today!!

She Feels Like Home is all about high school reunions and friends to lovers. Pete and Britt haven’t seen each other for ten years, can they overcome the reasons they’d grown apart after high school?

He was at his high school reunion.

No one was more surprised than he was. High school had been one long marathon of school and activities that would get him into Harvard. The dream of every kid who had a decent GPA. He hadn’t hated high school. But it hadn’t been fun either. The only person who had made high school bearable was Brittanica Jones, his best friend until she’d quit responding to him toward the end of their freshman year of college.

Just the thought of stepping foot back into the Muir High School social scene had him breaking out in a sweat. He had a primal need to turn around and go design some new code.

Or invent some pressing business that couldn’t be put off and get the fuck out of here.

He had no desire to re-live the emotions of his high school years. And he realized that he didn’t care if he reconnected with any of these people. He only cared about seeing Britt. He’d meant to call her last week, but work was insane right now.

For some reason, the reunion committee wanted to present him with some stupid award and have him give a small speech. Honestly if the request had come from anyone other than Caroline, the cheerleader he’d had a stupid crush on when he’d been in high school, he would have said no thank you.

Really, what was he doing here?

Of course, when he’d gotten the invitation his initial impulse was to show up all the people who hadn’t given him the time of day during high school. But really, he just wanted to see Britt. Ask her why she’d ghosted him.

She’d been at Caltech and he’d been at Harvard. Equally prestigious but sadly on opposite coasts. They’d communicated every day until one day she’d just quit responding to his texts.

He figured he would reconnect with her when he came home for summer break. But he hadn’t come home that summer. He’d gotten an internship with the highly prestigious computer lab at MIT and stayed in Cambridge. He’d been hurt and sorry that she hadn’t returned his texts but after a month of no answers he figured she’d moved on and let it go. He’d been deep into his meetings with the Billionaire Breakfast Club and shooting toward his goal of making his first million.

But he’d never forgotten her.

Pete was still considering bolting when a presence behind him prickled his awareness. He turned, saw a gorgeous woman in trendy black clothes with curves that couldn’t be contained by the short skirt and modest sweater. He glanced at her round face and silky brown hair with blond highlights and electric-blue sparkly painted fingernails.

The only thing that gave away Britt’s identity was the perpetual scowl on her face.

He stepped closer to her, an odd thundering in his chest. Grown-up Britt was a knockout. Not in the traditional suburban-girl sense but she exuded confidence. Sexuality oozed from her fire-engine red lips. Sexual awareness plunged through him unexpectedly.

Friends. They’d been friends. But his body clearly had switched from off to on like in Boolean Algebra, and the sudden hit of attraction took him off guard.

“Britt?” Her name came out more like a question than a hello.

“Hey.” Her gravelly voice was the same. The husky alto she’d been teased about in high school was now more of a sensual rub along his nerve endings.

He took another step toward her while people flowed around them to get to the check-in table. Looking at her, he wondered why he hadn’t tried harder to connect with her after she ghosted him. All those feelings of affection rolled over him. She’d been the only person who had made high school bearable. She’d called him on his shit and still managed to be his cheerleader.

“Yeah, you too.” She rubbed her toe on the floor.

“Peter!” The high-pitched squeal came from his right, interrupting the awkward moment.

A blonde whirlwind launched at him and fortunately he had the presence of mind to catch the woman before she knocked them both down.

He grunted at her weight but held his ground as she squeezed him tightly.

But his gaze was still on the scowling woman about five feet away. Pete extricated carefully from the blonde’s clinging arms and pushed up his nonexistent glasses.

The blonde tugged on his jacket. “Aren’t you going to say hello?”

She finally stopped moving long enough for him to see who was jabbering away at him. “Oh, uh, hello.”

Could he sound less confident?

His stupid crush from high school. He would have come in his pants if she’d done more than smile at him in high school. “Yes, uh, nice to see you.”

He started to turn around to look for Britt again.

“You look fantastic.” Caroline ran her hand over his biceps, pulling his attention back to her. “I was so hoping that I’d see you first.” She completely ignored the fact that he’d been talking to Britt.

Caroline’s tone and body language were far too intimate for someone he hadn’t seen in ten years. And far too friendly based on the fact that she’d barely spoken to him in high school.

He knew her type. The woman who wouldn’t have looked twice at him back when he was poor, but now that he had money…she wore billionaire goggles. It was tiresome and frustrating, and most of the time he ignored women like her. But he’d made a commitment to her as head of the reunion committee, so he sucked it up.

He gathered his composure, thought about the lessons from his BBC pals, and pulled on the mask that had served him well when he’d been presenting P & L statements and pitching venture capitalist firms for his first start-up. “It’s been a while.”

“I can’t wait to catch up!” She was just as perky as she’d been in high school, but parts of her face were weirdly not moving.

“Excuse me a moment.” He turned to speak to Britt, but she was gone.

Click here to enter for a chance to win a Kindle Fire. You just need to answer one question about the excerpt to enter. 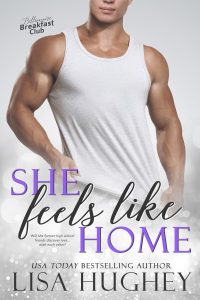 A high school reunion, friends to lovers romance with a sassy heroine and a billionaire hero